After another big W last night against the always tough Indiana Pacers, the playoff-bound Washington Wizards secured the seventh seed in the first round of the endless NBA playoffs. Posting three consecutive 40-plus win season for the first time since the late 70's, and coming off of consecutive road wins, the Wizards are poised for a long playoff run. Their prodigious efforts at the tail end of the regular season have drawn a familiar playoff nemesis, Lebron James and the Cleveland Cavaliers. Despite having never won anything, supposed "sports experts" have already given this series to the Cavaliers. However, we here at the DCOptimist are predicting just the opposite. Due to these simple factors, the Wizards are primed to win four straight games and motor on to the second round. 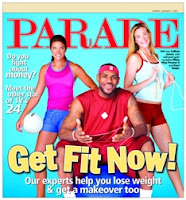 1. LeBron James remains unmotivated. The annointed Nike shill has been coasting all season, sporting declines in every one of his statistical categories. While many see this as him saving his energy for the playoffs, where generous refereeing, dubious commercial tie-ins and fawning media coverage will enthrust him back to the position as the top NBA star, we see his unmotivated play as a deeply-rooted issue that will haunt him throughout the series. Why even care about D-ing up on Jarvis when the Akron slot parlor may be hitting too often? Why take four steps in the lane to finish a game-winning lay-up when Sprite Commercials need to be filmed and nubile groupies need to be accosted? Why hold the ball for 23 seconds of the shot clock before launching a three when homosexuality needs to be banished? These questions are never asked/answered in the so-called experts predictions. We see all of LeBron's worldly aspirations, and lack of true basketball motivation as problematic and it ultimately leads to a lackluster series. Advantage Wiz
2. Mike Brown is a worse coach than Eddie Jordan. With a strangly-constructed unit of glacial seven footers, shoot-first sorta guards, a playmaking swingman, and a harre-krishna, the Cavs need a creative mind to put forth a competitive product, especially during these vastly important playoff games. The Cavs have Mike Brown, he with the stylish eye-wear and unfortunate insistence on bludgeoning the basketball viewer by installing San Antonio-style game sets on this diverse group of players. Only a coach with the acumen of Eddie Jordan could tinker with these lineups and deliver a winner. Eddie would have the anti-venerable Eric Snow playing double his minutes, and you need a veteran presence on a team like this. Advantage Wiz
3. Jarvis Hayes is playing. Absent from the last two playoffs with his gimpy kneecap, the great Jarvis Hayes is set to make his playoff debut and provide his usual brand of jumpshooting and other things. He can't wait to get in the game.

"I'm excited," said Hayes, who came up with a pair of big steals in the fourth
quarter. I've been hurt the last two times we went. This is going to be a 2-7
matchup, and we know we're going to see a lot of LeBron. So we're just going to
put our hard hats on and get ready for a dogfight series"

Impressive words from the seldom silky-smooth shooting swingman (aliteration rules!). Advantage Wiz
4. Antawn Jamison is having, yes, a career season. Even if he had to sit a few games with a bum knee and even if he had those games where nothing seemed to fall, the lone remaining Big has surpassed his 19 ppg average this year and at the tender age of 30, is at his peak. After his recent go-to performance against the Magic, Jamison has shown how this career year ought to continue into the post season. Advantage Wiz
5. And finally, the imminent return of injured starters! We already detailed Gilbert's comeback, but we have yet to mention the huuuuuge winks Caron Butler is giving to sportswriters regarding his health. Comments like these mean that there is no doubt "Tuff Juice" will be donning the number three jersey in time for Sunday afternoon's tip. Advantage Wiz
So break out the brooms Washington!

Posted by Bobtimist Prime at 9:38 AM