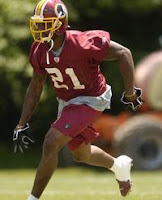 Apparently, all is well in Redskins park this afternoon, as franchise safety Sean Taylor arrived for the second week of those mythical OTAs. Seems like this FOOTBALL PLAYER disregards stereotypical notions regarding his contract status and decided that since he wants to be a part of the greatest tandem of safeties in the history of the league, he will suit up in those little burgundy shorts and perform Training Activities, whether Optional or not. This is sure to pain the Washington Post and noted optimism-hater Sally Jenkins, who sensing a possible shot opportunity of the cheap variety, never fails to levy 872 rounds at the braintrust. Wonder if I can come up with a space metaphor that describes this piece? How about a knowledge black hole, where tiny particles of insight vaporize into a massive gap of blathering, never to return.
Instead of attempting to funnel misinformation to the masses, the Post needs to hop onto the 'tism trail, lead by our peeps at the Times, who see QB-cum-savior Jason Cambell as so totally freaking awesome that every player takes his time out of Organized Training to deliver nuggets of praise. Could the Redskins have the greatest non-whining, non-arrested quarterback in the league? What's that Sanatana?

"We're light years ahead of where we were last year with Jason."

Seems like the Redskins are headed for the stratosphere. How about that for a space metaphor, Sally?

Posted by Bobtimist Prime at 2:44 PM