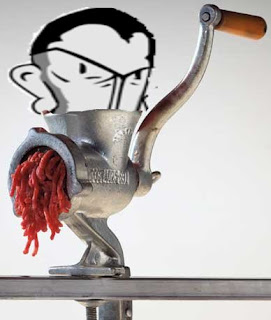 The Cleveland Cavaliers, in a laughably lame attempt to prop up the spirits of their disheartened fanbase, have employed the services of a nameless columnist whose gimmick is to only look at the good things in their forgettable basketball franchise. This "optimist" posts fluffy, saccharine attempts at humor every so often on the Cavs' official website, applying corny nicknames to the players (Larry Huge? TheBron? ugh), and making outlandish predictions. Obviously a public-relations arm of the Cleveland franchise, there is no move the Cavaliers make that doesn't look great to this "optimist." Never has this cheery, sunny individual expressed any sort of regret that Larry Hughes was given enough money to financially cripple the team for years to come. Never does he question the desire of the team's star player, knowing darn well that he has taken most of this season off in an attempt to globally integrate his fledgling brand name. In fact, this "optimist," goes as far as to say that this Cavalier team is going to win this series!
Interestingly, the Cavs warn incoming readers of this "optimist" when they make the mistake of clicking on his article, attaching the label, "tools" underneath the column's title.
A regular addition to this "optimist" is detailing the recent deaths of famous people. What's up with the morbidity? Clevelanders have enough problems with their insufficient public facilities, rampant crime rate and general malaise. Now they have to read about dead people?
As if the overall ridiculousness of this online dreck isn't enough, the "optimist" frequently gives terrible advice to emailing readers. A recent example:

Optimist,
I have come to a time where I must make a landmark decision in my
life. Do I spring for those few summer college classes or do I use my Student Loans to pay for playoff tickets?
Anton "Russian" Gorkavchuk Medina, OH

---
Anton,
thanks for reading and writing in. You were right to come to me.
These are special times we’re living in, my friend. History is being created before our very eyes and – in my humble opinion – TheBron will finish his career as the
greatest basketball player who ever lived. Ten years from now, would you
rather say that you saw TheBron and the Cavaliers winning the NBA Championship?
Or would you rather say that you graduated from some stupid college?
I think we both know the answer to that question. I think you’d rather be down here, Anton.

Yeck. This perverted slime thinks that Anton, a hardworking emmigre who has obviously escaped the corruption-infected lands of Eastern Europe to reap the benefits of an American education, should give up his impossibly high interest rate student loan, a financial commitment Anton will have to deal with for the rest of his working years, to buy a ticket to a meaningless basketball game? A disturbing marketing ploy to say the least.
The DCO urges you to contact this "optimist" and convince him that his existence is futile to his team, city and readers. There is nothing his happy little columns are going to do to help out the fact that Donyell Marshall sucks. No nickname is going to make David Wesley actually hit a jumpshot. No little answered email is going to make a Clevelander happy when they have to live and, god forbid, work in that decrepit hell hole. Please copy and paste your messages to this "optimist" in the comments section below, since I am sure that anything looking remotely grim is immediately lost on him.

Posted by Bobtimist Prime at 2:25 PM