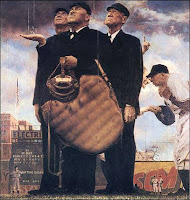 An enormous "spring" storm was the only thing that prevented the Nationals from winning their first season series today. All the signs of the imminent demise of the Mets (at least for this weekend) were there. The Nationals outscored (8-5) and very nearly outhit (15-16) the Metropolitans through two games, and on Saturday closer Chad Cordero even felt comfortable enough with a four-run lead to tease the home team with a pair of ninth-inning baserunners before getting down to business and shutting down the "rally." It's that kind of confidence that the Nats (winners of 2 of 3 overall, by the way) need in order to continue gaining ground on the allegedly NL-East-Championship-bound Mets.

No doubt the Mets are grateful for this respite from what would assuredly have been a humiliating, and potentially season-deflating, series loss against a team they were expected to easily beat up on all season. The fact that most in the sports world project these Nationals to best the much-referenced 1962 Mets in dreadfulness must also weigh on the minds of New York players, as they are the ones in the best position to ensure that their franchise is no longer home to the worst team of all time. (As an aside, can we dispense with the "worst team of all time" talk until at least August? It's not like there aren't other teams out there at or near 3-9 right now).

Even more heartening than the almost-won series was the steadying of the starting pitching. After a below-average couple of weeks, John Patterson and Shawn Hill for the most part stifled the much-ballyhooed Mets lineup. Ronnie Belliard is looking good in the field as well as the plate, and Ryan Zimmerman, perhaps taking advice from his hitting coach, is unconcerned by his early season struggles, surely an indication that he will break out in a big way soon.

So call off the dogs for at least a moment, because this team may yet disappoint many with its (relative) success.