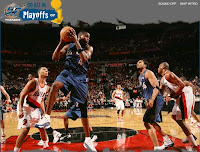 WASHINGTON, April 17 — Capping off the final home game of a historic season, Antawn Jamison of the playoff bound Washington Wizards brought his game back to the inspirational levels of his youthful days dropping a season-high 48 points on the Orlando Magic. Despite being 30 years old and thus, useless in the eyes of many-a sports columnist, Jamison decidedly stepped up his game against the Magic by executing his patented flip shots, running floaters, unneccessary threes and missed free throws on bewhildered defenders Hedo Turkoglu, Grant Hill and Tony Battie. The Wizards remaining "Big" had yet to truly shoulder the load of the scoring since the untimely departure of his two prolific teammates, but after a performance like this, there is no doubt that Jamison is ready to be the go-to-guy come playoff time. Now, if given the opportunity by the often experimental Eddie Jordan, Jamison ought to finish the job. In this game he had plenty of opportunities to take the victory, but after accounting for nearly 50% of the team's output, Antawn ran out of weird-looking shots. Jamison hadn't scored this many points in a game since his back-to-back 51-pointers as a member of the then hapless Golden State Warriors, a team that knows a thing or two about moral victories.

Posted by Bobtimist Prime at 10:21 AM