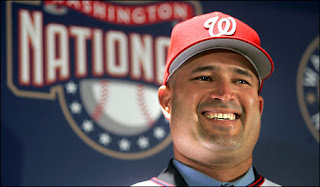 One of the coldest stretches (temperature-wise, not Zimmerman-wise, nor Wizards-wise) in the history of the month of April looks to be fading away, and like the suddenly warming temperatures in the DC area, optimism in the local professional sports clubhouses is beginning to brighten up the attitudes of players and fans alike. It is with this Eternally Springing Hope that the DCOptimist would like to present the second of its weekly Manny Acta Optimist of the Week (or MAO of the Week, for its redness like the chairman, but with a slightly lower body count) award to who else but Manny Acta. The award, which was named in Acta's honor for his consistently bright and cheery nature in the face of doom, will be presented to him for his recent remarks following the Nats getting nearly shut out by a 44-year old from an even crappier team.

"I love the way we are playing right now. They do not give up. They are giving
all the effort they are supposed to give," rookie manager Manny Acta said after
his team cut a 4-0 ninth-inning lead to 4-2 and had men at second and third base
before falling short to Philadelphia at home yesterday. "We were not going to
play the whole season the way we played the first week. That's pretty much
impossible. We are a different team now. I hope it can stay like this."

Simply irresistable spirit for the rookie manager in what is fast becoming a slightly memorable season. Of course Man-Act loves the way the Nats are playing now, after their 13th inning mercy killing of the Phils on Wednesday (after going 1-for-12 with runners in scoring position), narrowly avoiding another implosion by fading closer Chad Cordero on Monday and being saved by this lovely April weather Sunday, the Nats are avoiding ineptitude like people avoiding death-by-beat-up-Hondas while crossing University Boulevard in Langley Park. Thomas Boswell notes, in a column eerily resembling a certain blog, that the cheery nature of Acta is rubbing off on his players, making the team so much different than the historically crappy teams they are often compared to.

"This Nationals team does not have the dismal attitude, the dreary clubhouse
atmosphere, the palpable cloud of depression that follows a breathtakingly awful
team. An upbeat club, even if it lacks talent, can only be so bad. Knowing that
you can't be a good team doesn't curse you. Hating your situation, rather than
working realistically to improve, is what blights a season."

Many might think attitudes like this is are, like Sidney Crosby's last two playoff games, pointless, and leading to no wins. But we here at the DCOptimist know the importance of a great attitude. Why, to some, it may be a strange thing that once a blog hits the interwebs, the worst finish in the history of the ever occurs on the court followed closely by two star players on the only viable playoff team going down with injuries, only to be then cruelly followed up by bad baseball and worse weather. But, like the Penguins, we know a quick exit from this is upon us, and like Wizards coach-cum-scientist Eddie Jordan says, "We have a point of reference now. We can throw everything else out the window." Hey, we could be Seattle.

Posted by Bobtimist Prime at 9:43 AM