The Chorus of Defiance 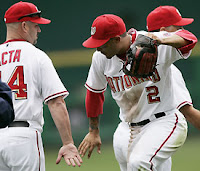 Maybe you too have been riding the high-cresting wave of 'tism that is sweeping through RFK stadium after the Nats brilliant trip through the depths of the NL Central. Sure it came to a bit of a crashing halt last night by way of Brad Penny's mullet and Juan Pierre's slapping, but ever since overcoming injuries to 80 percent of their starting rotation, harnessing the untamed dance that is the Chico sideways fastball and withstanding the plague of the Speigner, the Nats are the talk of the town.
Playing the muse to frequent DCO topic Thomas "milky whiteness" Boswell, the Nats, with "more wins than the Yankees," have inspired one of the most compelling pieces of 'tism yet to be printed this season. It's only fitting that Boz's latest 'tism opus, where "The Plan" is praised, Matt Chico is "promising," Shaun Hill is Brandon Webb, and Hanrahan, Fruto and Ballester are big-upped, comes on the heels of his 3,472,387,013,478th bashing of the Baltimore franchise and their clatch of whiny overpaid oft-injured "pieces." It is pretty sweet that Ted Lerner isn't mortgaging off one of his grossly overpriced high-rises in Bethesda for the services of forgettables like Aubrey Huff, David Segui, Albert Belle and Will Clark, instead relishing in the dreg-tastic goodness of Mike Bacsik, Jason Simontacchi, Dmitri Young et al. Of course Boz pleads for the organization to open checkbooks come '07 for the always ballyhooed, yet never fruitioning free agent class. The DCO, never one to stray from The Plan, say, forget that. Look again at the Yankees (and again look at their worse record than the Nats), who have consistently added checkbook-crunching free agents to their glam-rock lineups only to have them suck, get hurt, get caught, or get hated on. Big-dollar free agency in baseball has worked in very very few instances, and the names of such bustaroonies as Vaughn (both Gregg and Mo), Pavano, Drieford, Ashby, etc. all ring a lot louder than Pedro Martinez (and that is not counting his brilliant days in Queens, right Mets fans?).
Another reason why the Nats are/will be better than the O's is the presence of a much more awesome manager, possibly even the greatest manager in the history of baseball, Manager Acta. I think more praise needs to be heaped on Manny for stitching this lineup together, something Sam Perlozzo can't do with six available outfielders all whimpering and dugout-slapping. ChairManny benches negligent powerhitters for not gutting out groundouts, seeing the efforts blossom into productive seasons. ChairManny knows when to pull strugglers like Speigner after two innings of hittable pitches, unlike Perlozzo, who was way to slow to touch the hand while Dannys Baez was on the mound tossing BP pitches in one-run games. This is how Manny Acta is treated in his hometown. This is how Perlozzo is.

Posted by Bobtimist Prime at 9:24 AM