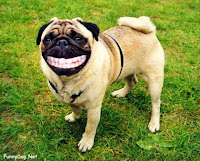 We here at the DC Optimist would like to apologize for our comments a couple of days ago regarding the defense of Clinton Portis, who has quickly turned into the Rant Casey of NFL writer and fan finger-wagging, spreading a penchant for soapbox-standing as if it were rabies. Simply associating yourself with this one-time media darling leads to an innumerable amount of pooh-poohing blog posts. To characterize these genuinely altruistic whistle-blowhards as racists goes a little too far. I mean, being that most of them likely grew up near the mean streets of places like Potomac where dog fights likely involved Ace Combat 7 for PS3, they know only of Benji, not of "Dog."
We just want to reiterate that The DC Optimist in no way condones dog fighting. In fact, all of us are dog lovers. Never would we go as far as thanking the vicious brutality that was allegedly performed by Michael Vick and defended by the misunderstood Redskins running back. Thanking this indefensible act simply for bringing to light its existence is similar to thanking the drafting of Kwame Brown and the trading of Rip Hamilton for bringing to light the mismanagement of Michael Jordan; the damage has already been done.
We don't wan't to be associated with Portis's anti-animal stances, we are pro-animals, especially of Hershey Bears, again heading for the Calder Cup with the Capitals' extra-bright future in tow. Of course some hater-types, who enjoy animal fighting, attempted to thwart the greatness of the Bears by actually reaching into the penalty box to attack Kip Brennan. "If that's what he wants to do, do it."

Posted by Bobtimist Prime at 2:39 PM