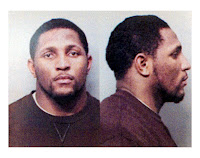 We here at the DC Optimist don't intend to make a stink about what seems to be a minor occurrence at the Baltimore Ravens' training facilities, where key team cogs Ray Lewis, Ed Reed, Jonathan Ogden, Chris McAlister, Samari Rolle, Trevor Pryce and Kelly Gregg were M.I.A. (kind of like the Ravens' offense in the playoffs last year). The DC Optimist sees no need to point out that Lewis, who was understandibly pouty after not being selected to the Pro Bowl last year (even if he backed in later on), may be seeking a new contract that respects his value to the team despite glaring health issues. We do not feel it is necessary to mention the fact that even if these workouts are labeled "optional," these very important locker room presences will not be together to make sure that the fabled draft classes the Ravens obtain every year (Chris Redman and Kyle Boller included), can learn from the winning tradition in the Charm City. In fact, we may not even mention certain players and their off-the-field non-murder transgressions. 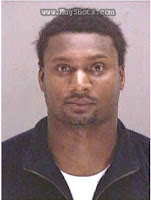 No, we here at the DC Optimist are realists. We see a team lead by an aging, oft-injured quarterback who specializes in five-yard dump-offs not named Mark Brunell withstanding a glaring playoff flameout last year against a dome team in their Hamsterdam backyard, in addition to taking on a new, also often injured running back heading to the diminishing returns stage of his career, remaining invincible to criticism. Why if you posess the prestigous pomposity of coach like Brian Billick, whose offensive genius has yet to be realized in 9 years in Balitmore, you can simply deflect all media criticisms and point to results. We could write an 800-plus word opus smashing the management of the Ravens for losing communication with such important individuals during this critical time period, held much closer to the beginning of the season than the OTA's of the Redskins (who still can note just one missing player). But that would be trite, and it could be refuted, say three days later.


Similarly the baseball team that has represented ballmer, and for a woeful period of time the District, can point to their results when criticism arrives, just as a rather cowardly annonymous commenter may have done in a recent DCO insight (although this commenter is anonymous enough to be likely located in the great state of Delaware, home of Dow chemical plants that spurt foulness onto I-95 like deer entrails). 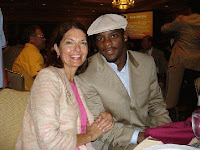 No, instead of trying to start some meaningless war with Ballmer in the midst of two transitioning teams moving in opposite directions meeting up (one losing five straight, one winning 6 of 7), we will instead look to ultimate positivity, our hallmark. We look to our May 18th MAO of the week, Redskins running back and entertainment phenomenon, Clinton Portis, who on a very special episode of Ballers on the BET network, guaranteed that the 'skins would be in the NFC championship. Portis, an expert at press-handling, shook off the negativity-laced questions from hard-hitting "journalists" like Guy Torry, John Salley, and an even more annoying Hugh Douglass, providing us with a statement that will drive us throughout what looks like a massively successful 07: "The haters is my motivation." Simply brilliant work, again, by Portis, who also praised Joe Gibbs, praised the draft strategy, praised Jason Cambell and said he needed his '06 injury woes to rest. We too saw something special in the manner that the Redskins handled their offseason and also predicted similar results. As for a prediction in Baltimore? How about puzzlement.

Posted by Bobtimist Prime at 9:42 AM