Overheard at Brendan and Etan's date 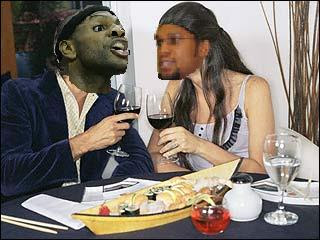 Recently, much-maligned Washington Wizards centers Brendan Haywood and Etan Thomas mended their torn dreadlock of a relationship. According to Ernie Grunfeld, "they went on a date the other night, they're real good friends now." The DCOptimist was at the scene of this "big" date and we transcribe the encounter below.
--The two enter the posh Ozio for a late lunch, pulling up at a chair in a lightly-lit section to the rear.
Haywood: Man, that playoff series sure was tough wasn't it. I for one have had a problem with the officiating.
Thomas: Tis true. I relate it to a few bars I have been working on for my next protest rally. I call it, "LeBlanco Games" peep game:

My heart lie unbeaten,
yet remaining virulent,
for even the truest warriors,
cannot withstand the system
When color is whistled by the white-striped zebra,
the play is called by Imus.

Haywood: Word. I bet if that blasted Eddie Jordan would have put me in the game, Big Z wouldn't have been so dominant. Shoot, Z was saying it himself!
Thomas: Thus is the struggle, young Brendan. Athletes frankly need a voice in this league and I can only purport your languishes on the wooden slave ship of the bench to the "great republican party." Would he have had the same reaction to Darko Milicic, Rasho Nesterovic or Nenad Krstic?
Haywood: So you sayin' that it wasn't Eddie's obvious hatred of me and my offbeat contributions?
Thomas: Brendan, this league was built by the white man and it is sold to the white man. Do you think they want to see one of their own consistently shut out by one of us brothers? Open your eyes man. Why do you think Steve Nash is always the MVP?
--Haywood picks up a piece of complimentary bagguette. Before he can make a move to butter it, the piece slips from his hand onto the floor.
Haywood: True, but Nash don't want it with me. Besides, coach is black.
Thomas: Don't let me get in debate mode young Brendan. Coach Jordan is a pawn of the ultimately white system that is the National Basketball Association. It's the same way that I was denied my original starting position earlier this season. The powers that be could no longer stand for an authoritative black force in the paint.
Haywood: Maybe you're right 'tan. I just can't seem to figure out how to get on coach's good side. I mean, it's hard being a center on this team. I know my three step fadeaway is an unknown commodity in this league, that is why I utilize it with every minute I can get. People just don't see how big sexy's post moves have the element of surprise.
Thomas: I fully understand, B. The league no longer wants us to think so much as it wants us to promote their product and play nice.
--waiter arrives with a glass of fresh-squeezed wheat grass juice, and a coke.
Haywood (in a rage after taking a sip): I ordered diet you idiot! Yo manager, replace this waiter now. If he is not replaced, I am leaving! Who is this guy to ignore my requests?
Thomas: Sometimes waiters make a mistake that is so unbelievably blatant that it renders you speechless, left without a response or reaction, until you think about it at a later date. You could have interpreted this as a bad mistake by a service-worker who should be more focused on making the correct drink orders than selling cokes that aren’t diet. Or you could take this as a blatant slap in the face. You could make the connection to a larger problem in society that deals with obliviousness and stereotypes. Is it an unfortunate reality that many people are still dwelling in the pit of ignorance?
--Etan, now visibly upset, attempts to throw a piece of the bread at the waiter. Misses badly. Haywood then picks up another piece of bread to throw at the waiter, also misses badly. A second free and open attempt by Thomas hits.
Waiter: Hey! You can't do that just because you are basketball players.
Thomas: Excuse me?! What did you just call me? There are certain statements that will always remain in my permanent recollection. This waiter has just been added to that list. I’m not looking to squeeze an apology from you; don’t even want one. Why would you apologize for the way that you feel? That’s like Michael Richards apologizing for his racist, hateful rant. Not likening this waiter to Kramer, but don’t apologize for something you’re not sorry about. If you simply regret that people may look at you differently as a result of your feelings, well, that’s an apology you can keep.
Haywood: Word. This restaurant needs my presence. I am the best big man here. I think I may leave a few seconds before the check arrives, removing my signed picture from the wall and taking it with me.
Thomas: This waiter has created the public perception that we players were once again unjustly complaining about something we weren’t happy with. Creating an overall illusion — no matter how off base or completely wrong it is — can change the public perception of what is being implemented. Furthermore, it can garner support for something the implementer knows is wrong. We saw this with the invasion of Iraq.
--Thomas and Haywood are asked to leave, as their contributions to this meal were minimal at best. Haywood proves relatively easy to move, but Thomas' bulky contract prevents many other restaurants from accepting him.

Posted by Bobtimist Prime at 2:00 PM