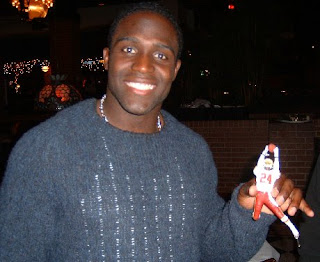 Shawn Springs, with delicate groin intact, will attend those hallowed organized team activities after all, levying the final blow to optimism haters and finger waggers whom were determined to slant the absences of defensive backs as characteristic of a team fraying at the seams. Correctly predicted by us using the Post's scientific "win probability," we found the absences of the two Seans/Shawns to be a waste of good finger wags when there are more important things to get upset about, like the sight of Jon Rauch and his enourmous "I" neck tattoo warming up with a one-run lead.
It took the only head coach in the league with a bust in the Hall of Fame in Canton to smooth out the situation as Joe Gibbs has done numerous times in a hot-iron-on-Chris Cooley's-bush sort of manner. The coach reached out to the wayward Silver Spring native, urging him to return from an extended non-drug-related rehab stint in Arizona after Springs' steadfast refusal to accept a paycut, and his being mentioned in every possible trade scenerio that never happened, ultimately winning him over with his gentle elderly patter and leadership acumen. After all, we all know how important OTAs can be, and sometimes inferior teams from crackhouse-laden streets up north, have to make sure that newly acquired, often injured running backs that often do not make them a priority, attend them. Some teams have nine of 22 of their starters missing from these OTAs, a problem the Skins have not had.
Springs will anchor the shutdown side of the defense opposite former teammate Fred Smoot and nickled by not-at-all-overpaid free agent signee David Macklin, safetied by greatest tandem of safeties known to man in Taylor and brilliant draft choice Laron Landry. That is a secondary I can roll with, unless I am T.O., then I wouldn't be able to roll, nor catch the ball when I am seldom open, nor get up after I have been clock-cleaned by these crisp tacklers. Gregg Williams, the head of this band of swarming backs, has always had a great secondary in his successful tenures as defensive coordinator. This looks like the best of the bunch.
Speaking of finger wagging, it was our own 5-18 MAO Clinton Portis, usually a deft handler of reporters-haters and their stilted questions, who was taken to task for more or less endorsing the basic American rights of a co-worker. O, by-the-way, the reaction seems, a bit racist. In a statement formulated by some lawyer-PR-type, Portis responded to the haters, his motivation by the way lame Baltimore columnists, adding this nugget for those who have their head propped high in elitism clouds:

"I'm from Laurel, Mississippi. I know a lot of back roads that got the dog fight
if you want to go see it."

Posted by Bobtimist Prime at 9:46 AM