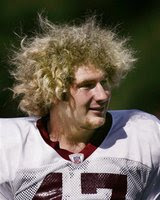 Instead of resorting to cliches such as "much-maligned", and without falling back on mocking (and equally cliched) references to a 700-page playbook, we will instead label the Redskins' offense of last year, led by certified offesnive genius Al Saunders, as misunderstood. While nearly everyone acknowledged the immense complexity of the system, and the time necessary to implement it properly (estimates of this time seemed to range from one training camp to half a season, to a full season, to two full seasons), critics and optimism-haters were still quick to jump on the team's (and Al's) lack of success moving the ball and scoring points.

With that in mind, we give this Friday's Manny Acta Optimist of the Week (MAO of the Week) award to Chris Cooley and his teammates on the Redskins' offense, for their comments and attitude this week (the Post actually described them as "brimming with optimism) that this offense is coming together at last and will, presumably, be a force this coming season. Cooley is reported to have said that he and the offense in general are "faster" this year, which doubtlessly will lead to some of the field-stretching bombs from Jason Campbell that we all were hoping for last year. Redskins Insider has some more specific information on the matter that should give fans already hoping for big things in the fall even more reason for hope.