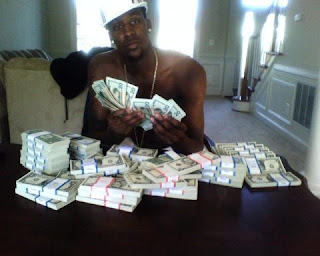 Redskins training camp has had the easy going nature of a workplace team-building session, complete with trust-falls, friendship-buildings, and early closures. The Nationals are tearing through the National league, reeling off consecutive wins and propelling out of the basement as if they were networking bloggers. With all of this goodness surrounding the DC sports scene, why have there been such negative attitudes towards the most playoff-prolific of the local franchises, the Washington Wizards?

All of a sudden, after a future-gambling, cap-crunching importing of Kevin Garnett to the Boston Celtics, everyone's favorite big three seems tiny to some in comparison. Foreign commodity Juan Carlos Navarro couldn't be given a contract without sacrificing Abe Pollin's precious luxury tax dollars and was subsequently dealt to Memphis for...something. Andray Blatche, looking at a new contract and the opportunity to break out into the KG-molded player we all see in him, slipped into the Chris Webber-molded player that we all hoped we wouldn't see in him by making it rain on a undercover police officer posing as a prostitute, leading to a much-blogicized arrest. Deshawn Stevenson was retained for that reasonable contract we all hoped for, but the move has occasional Wizard-noticer Michael Wilbon, amongst other disgruntled, asking whether Navarro would be a better option. And our favorite venerable Wizards' beat writer Ivan Carter is dealing with internet threats being placed on his totally awesome blog entries (if only the DCO received such threats, after all, the haterz is our motivation).

Issues like these may have a less optimistic person worried that the playoffs, where the Wizards have become accustomed to attending, may be out of reach. It may cause them to worry that Carter, seemingly losing his sanity, will cease giving us updates on exactly which picks the Wizards won't get for Navarro, and instead spend his off-time shopping for on-air shirts with Mike Wise, thus dissapointing the internets as a whole. But as you may have noticed, this place is never less optimistic about anything. Herein, we discuss why these minor issues will have no effect on the Wizards continuing their motoring-to-the-top ways, eschewing these distractions, building for the future, and continuing to provide Ivan Carter with spectacular internet posting material (seriously, try asking players the tough questions yourself before you go dissing Ivan, nerdz).

1) The Ballyhooed Garnett deal: The C's finally returning to some sort of eminence is a nice balancing out of a league, and having to deal with Garnett crying on camera about his loyalties and blah blah blah was also irritating, so we welcome this deal. However, we can't simply annoint KG, with new teammies Ray Allen and Paul Pierce, as the best trio in the eastern conference right this second, nor can we immediately place them above the Wiz on our scientific ranking systems. Unlike the KG-Allen-Pierce combo, the Wizards' big three (Caron, Antawn and Gilbert), have had two seasons of togetherness. Does chemistry count for anything on the basketball court (Seriously Hollinger, "glorified Wizards?" They will be lucky to touch the highest scoring trio in the league)? Carter, who has taken to balling with NBA players on occassion might say yeah. After all, it usually took a few games early in the season for the Wizards to engender new teammates into their systems. This will not need to occur in 07-08, for the chemistry will already be bubbling from their first place mid-finish last year.* Does this Garnett move resurrect the east? Maybe, but we feel like the ressurrection was in the midst of occuring last year*, until an unknown, unholy being decided that 2007 would not be the year glory would bestow itself in Chinatown. Speaking of injuries, how many games have Pierce and Allen combined to miss in the last two seasons? Everyone knows what happens when two of the big three are missing, even though everyone should have forgotten.

2) The Navarro deal: Juan, A second rounder whose decision to come stateside was ill-timed to say the least, will net the Grun-trust at least a first rounder sometime in the near future. This is a prodigious gain, frankly. Too many Wizards drafts have consisted of middling picks that either become Jarvis Hayes or sit overseas for a year. With two first rounders (sometime), the Wiz will be in the position to continue to bolster their future, or even deal for that elusive big man that doesn't really exist for less than 20-mil a year.

3) Blatche's booty call: Look, we are not going to again link ourselves to taking a stand for victimless crimes, but lets give the child a break. He is only 20 years old, has been shot, and has had to share a locker room with Michael Ruffin. We can grant him a little slack when the heat turns up and the local police officer count explodes. He has even taken to the airwaves to declare his innocence. The worst thing the Wiz could do would be to cut this kid loose for this transgression. The aforementioned Chris Webber may have had his personal flaws, but his colorful rap sheet was still the wrong reason to deal him for the genial Mitch Richmond. Give the kid a chance to redeem himself.

4) Stevenson's retaining: Look, the Wizards could have maybe dropped Rashard Lewis money on their venerable defending two-guard for his undying vet-minimum loyalty, but they didn't. They locked up that starting two position for the future at a reasonable price, ensuring the lasting chemistry betwixt him and Agent Zero, and supporting his role through the drafting of Nick Young. Stevenson had two major plays that lead to W's last year (1. dish to Caron for dagger vs. Knicks, 2. shot block and free throws vs. Hawks), and his swag was entertaining to watch. He fit nicely into Eddie Jordan's supposed system, and he actually has the potential to get better, with surgically repaired knee ligaments rounding into form. Why send him elsewhere for an unknown? Gilbert is happy with it, and with doomsayers worried about his pending free agency, keeping him ebuilient is of the utmost importance...

5)...As is keeping our friend Ivan Carter happy: Please don't let the internet bother you. One trip through the message boards ought to have you convinced that these people are pretty much crazy. So keep us posted on those Navarro particulars, PLZ!

Posted by Bobtimist Prime at 2:36 PM

Ivan, while that certainly is representative of your fan base, as sad as it is, no need to start calling internet losers out who think we should package Gilbert, Caron and Twan for Shaq. Just like the real world, the internetz is full of idiots. Dont pay them any mind.

Here's an idea...utilize DCO as your ambassador to a more intelligent fanbase...welcome to 'tism! Sunny side up!